The BOLData X570 Series represents a superior desktop platform based on performance, visual experience, and energy efficiency. It enables affordable innovation, massive performance headroom, all in an efficient design that consumers can feel good about.

Price is before all applicable taxes, rebates and does not include shipping.

Experience the difference of innovation and performance.

Windows 10 is the first step to an era of more personal computing, one in which Microsoft is moving Windows from its heritage of enabling a single device – the PC – to a world that is more mobile, natural, and grounded in trust. With Windows 10, applications, services, and content move across devices seamlessly and easily. Windows 10 features a universal app platform and universal store, providing a consistent experience across devices.

Expanded Start menu: The familiar Start menu is back, providing quick, one-click access to the functions and files that people use most, and also a new space to personalize with favorite apps, programs, people, and websites.

Apps that run in Windows: Apps from the Windows Store now open in the same format that desktop programs do. They can be resized and moved around, and they have title bars at the top, allowing users to maximize, minimize, and close with a click.

Snap enhancements: Have up to four apps snapped on the same screen with a new quadrant layout. Windows will also show other apps and programs running for additional snapping, and even make smart suggestions about filling available screen space with other open apps.

Multiple desktops: Instead of too many apps and files overlapping on a single desktop, it's easy to create, and switch between, distinct desktops for different purposes and projects, whether for work, personal use, or both.

True machine intelligence featuring 16 threads and the highest 8 core-processor clock rates, all on the new Socket AM4 platform.

Speed through your most demanding applications

Double a system's memory capacity as module densities mature. DDR4 memory technology is up to twice as fast and delivers 50% more bandwidth and 40% more energy efficiency than DDR3 technology when it was introduced. Designed to enable the next generation of enterprise and consumer products, DDR4 memory works with next generation processors and makes everything you do on a computer or server faster and more efficient than ever before.

There's an easy cure for a slow computer: more memory. Designed to help your system run faster and smoother, DDR4 desktop memory is one of the easiest and most affordable ways to improve your system's performance. Load programs faster. Increase responsiveness. Run data-intensive applications with ease, and increase your desktop's multitasking capabilities.

Make everything on your computer faster

Memory is a component in your computer that allows for short-term data access. Since your system's moment-to-moment operations rely on short-term data access – loading applications, browsing the Web or editing a spreadsheet – the speed and amount of memory in your system plays a critical role. Load apps in seconds by increasing the speed of your memory and installing more of it.

If you're like us, you use your computer to do lots of things at once. You might be editing a document, while also looking at pictures and browsing the internet. This naturally leads to a performance problem: every app you're running requires memory and competes for a limited pool of resources. Overcome this by installing high-density modules in each memory slot for seamless multitasking.

Unleash the Power of DirectX® 11 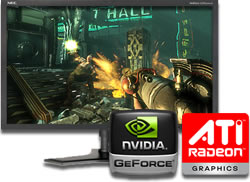 Whether you're a no-holds-barred gamer, a video enthusiast, a new Microsoft® Windows 10 adopter, or a digital photography aficionado, there's an NVIDIA GeForce or AMD Radeon graphics processor that fits your lifestyle.

These graphics engines unleash the power of DirectX® 11 with awesome performance, stunning visual effects and more dynamic interactivity than ever before.

This picture page is currently being updated. Please check back again later.